So what is it about pallets that make them such a significant cog in the global supply chain? Read on for more about the power of pallets on logistics and global trade.


Sometimes, the real star of the show is behind the scenes. It’s so commonplace and so inconspicuous that it becomes invisible. Without it, however, the rest of the show couldn’t go on.

That may seem like a big claim when it comes to the humble wooden pallet, but think about it for a minute. Unless you make your own furniture or grow your own food, just about everything in your house had to travel from a manufacturer to a warehouse/distributor to a retailer. And all of those items likely made at least part of the trip on a pallet. 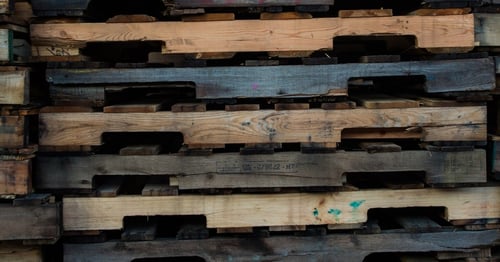 What if there were no pallets? Well, labor is a major cost factor in all business sectors, so think about how much more products would cost if, for instance, grocery store employees had to carry canned peas from the loading dock to the sales floor three or four cans at a time. Or, if the product you ordered from Amazon had to be handled individually at each hand-off along the way. Not only would it cost more, it would take a much longer time to show up on your doorstep.

Like many other innovations; however, pallets were created to fulfill a need driven by war, not entertainment or consumer convenience.

Innovation that fueled (and fed) the free world

One of the biggest challenges of WWII was the need to supply troops stationed everywhere from Europe to the Pacific. The U.S. military had to transport everything from tanks to toilet paper over longer distances than ever before, and they encountered significant obstacles. Canned goods, for example, were often transported overseas in the open, and, by the time they reached the Pacific theater – a distance of more than 8,000 miles – were often corroded or otherwise damaged, with loss rates as high as 40%.

Those numbers really hit home when you put it in human terms. In April 1942, a large contingent of U.S. and Filipino troops was forced to surrender due to malnutrition and disease. Why? The supply chain had broken down, leaving them without the food and other supplies they needed to fight.

The power of pallets

That defeat in the Pacific underscored the importance of supplying troops, but the modernization of the WWII supply chain started at home. The heroes were the humble wooden pallet and another innovation: the forklift. As Rick LeBlanc wrote in Pallet Enterprise, “The use of the forklift trucks and pallets was the most significant and revolutionary storage development of the war.” 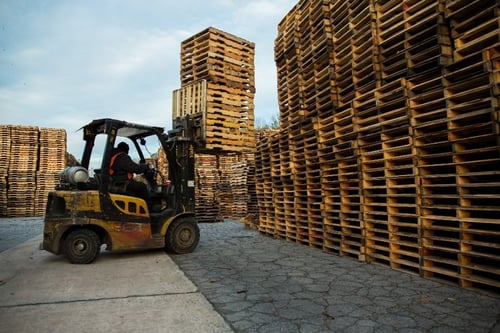 So what is it about pallets that make them such a significant cog in the global supply chain? There are several reasons, most of them having to do with efficiency:

There’s one story that perfectly illustrates the efficiencies pallets can deliver and the lengths organizations will go to optimize them. Ikea redesigned its “Bang” mug three times – not to meet consumer demands, but for pallet optimization. With the original design, they could fit 864 mugs on a single pallet. After the third redesign, they were able to fit 2,204 on the same pallet, which reduced shipping costs by 60%.

Looking to the future

The present and future of the pallet industry are as bright as its past. Take a look at these statistics:

It’s clear that the "lowly" pallet won't be threatened with extinction any time soon. In fact, pallets – especially recycled pallets – are in high demand at companies with strong sustainability programs or cost reduction strategies. Businesses of all types (including 48forty) are constantly innovating when it comes to new technologies that work with and improve the tried and true pallet.

Pallets aren’t the only tools that have withstood the test of time – after all, just look at the wheel! In both cases, though, they’ve attained that longevity by satisfying a real need – not just a want – in ways that have yet to be disrupted by something better. Modern technologies can deliver subtle improvements, but, like the wheel, wooden pallets will be a staple of global trade for a long time to come.